My wife and I went to see KOLT Run Creations production of Antigone at the California Stage last Friday.  As I said before, I don’t do theater review really,  I’m more interested of trying to understand what makes a play work.  What’s the difference, you ask? Well I don’t suppose there is very much, but I tend not to reveal story lines, and I focus more on what I think of as technical details.

As with KOLT’s “Escape From Happiness“, Antigone is an excellent production, well conceived and executed.  Unlike “Escape”, Antigone is a dark tragedy, the pacing is different, and the outcome, although known from the start, is still something of a shock. The set is large and minimalist, so the actors need to carry the play 100%, and they do. 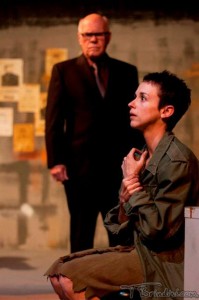 The action is driven by Antigone’s clash of wills with her uncle Creon, and her internal struggle to face up to what she see’s as her solemn duty, versus self-preservation.  Antigone is played by KOLT co-founder Kelley Ogden, Creon is played by Patrick Murphy.  I’ve seen both of these players before, and they are both 100% dedicated to their craft.  Both performances were outstanding. There is no doubt in my mind that either of these two actors could work in any theater (or movie).  The supporting actors were on the mark as well.  Lots of talent there.

Antigone is also a very complex play, and it’s fair to say it demands quite a bit of attention.  The dialog is modern, but it’s still driven by the ideas of a Greek playwright who lived 2000 years ago.  So let’s say it’s philosophical and complex.

As heavy and complex as this story is, it still has wings, it has a lightness because it moves along and it’s intense.  But although it doesn’t drag at all, there are no soft spots (e.g. comic relief), you really have to pay attention.  Which I think is a good thing; to be able to pay attention will serve one well in life.

One thing that I didn’t understand was how the interaction between the Nurse (Gay Cooper) and Antigone in the first scene drove the story.  So I sent an email over to Kelley and Lisa, and they graciously took time to reply.

The essence of their response was that the interaction between the Nurse and Antigone helps frame Antigone’s internal struggle, as well as frame the relationships she has with her sister and lover — both of who are very different kinds of people then Antigone.  Every breath of pain, suffering and tragedy is really driven by the conclusions reached in that first scene.  Nobody except Creon really grasps how dedicated Antigone is to her ideal. Which of course is what destroys all of them in various ways.

So the first scene establishes that vast gulf that exists between Antigone and her peers, and sets up the conflict between Antigone and Creon, and unmasks the true nature of the tragedy, which is that Creon and Antigone are very much alike — possessed of a rigid ideology, devoid of pragmatism.  They bash up against each other relentlessly. And bring down a whole society.  Sound familiar?

Well that’s it for today.  Thanks for stopping by and have a great day!

This entry was posted in Commentary, Plays. Bookmark the permalink.