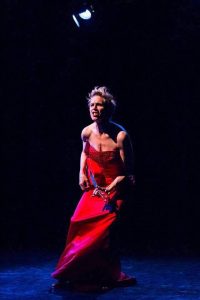 Sara Porter’s “Sara Does A Solo”  (San Francisco International Arts Festival May 20th and 22nd) might have been titled “Sara Tells A Story.”

The essence of her performance is story telling through dramatic movement.  She incorporates dynamic rhythm, punctuated with moments of stillness and silence, to create a sense of heightened awareness.  And she talks about what she is doing, and why. And the why is an integral part of the event.

She opened the show with a time-warping revelation about her identity as a dancer.  Using a simple phrase — “I am/was/will be a dancer” she opens the whole stage, and the audience, to being in the moment, and nowhere else.

Sara Porter’s dancing is graceful, athletic, acrobatic — she’s lithe and strong. We get to see quite a bit of her body. She changes costumes several times on stage, and is free of just about all clothing once or twice.

Her language is focused, unrelentingly direct and to the point.  I wouldn’t call it angular, but it is lean.  It is free of silliness, self-absorption, and is not  coy.  She captures quite a bit of the sublime nature of identity – how non-linear we are and yet linear -inside the motion of the event. It’s outrageously funny in some parts, and brutally vulnerable in other parts. 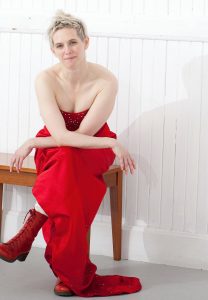 The ethereal quality of this experience is grounded by her intensity, the full-on expression of her femininity and womanhood.  Porter is not giving us adolescent expressions of puberty — this is a mature woman who isn’t afraid to be just that.

She can polymorph into her father, her mother, siblings, her children, her dog, she can take on the characteristics of an entire generation, culture, sub-culture.  She is the only person I’ve even seen who can play the Ukulele with a heavy-metal ferocity.

The SFIAF show was produced by Laura Lundy-Paine of Blue Panther Productions. Featuring music from Mary Margaret O’Hara.  Photo Credits: Seated photo of Sara is by Cathy Bidini. Photo of Sara playing the Ukelale is by Tamara Romanchuk.

Sara has shows coming to Toronto, NY and Ontario.

This entry was posted in Reviews. Bookmark the permalink.